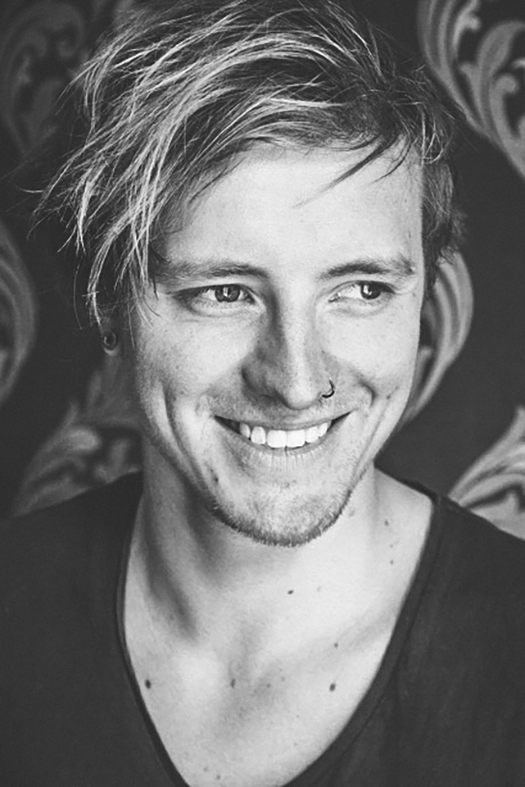 Paul Kupfer is founder and managing director of soulbottles – a front line trooper of sexy sustainability, bottle maker and water drinker. The last-a-lifetime soulbottles not only look great, they have also spread incredibly fast in the past three years. And that’s really good, because mother nature, you and Viva con Agua profit from it – the latter with a support of 1 Euro per bottle sold. We can tell that Paul and his companions are planning a new coup because they have just started a new crowdfunding campaign, which we definitely do not want to mention here in any way. Nor should it play a role in the course of the interview either, as we came together to discuss pear-bean-bacon-menus and the hobbies of pensioners in the year 2070. So in this spirit: let it flow and may the bottle be with you.

You have the power to change the world over night. Where do you start?
That question is way too vague. How much can I change? Everything? And why over night? Well I would say I start with a good dinner and have a good think about it. Then I would probably start with the basic needs of all inhabitants of the earth and try to change the structures to steer us away from capitalism and towards more love. That’s a little vague, but so was the question…

You meet your 18-year-old self. Which piece of advice do you give yourself?
At 18, I was totally convinced that I need to finish university as quickly as possible. Now, I have a different view on that. I don’t know if I would tell myself that though. As most of the time, you can only see where your decisions have led you in hindsight. It was only because I had so much time next to studying that I could even found soulbottles with Georg. And I would tell myself not to pay so much attention to what others think of me. I got into music, travel and languages so late because I was always afraid of doing something wrong. I would try to put an end to that fear.

What can’t you get enough of?
The honest answer would probably be Game of Thrones. But for advertising purposes, I’m going to go with “The supporters of our crowdfunding campaign”.

Which moment changed everything?
An internship in London years ago. The company was so chaotic and out of it that it went click in my head and I thought: “If they work like this and still succeed, then I can do it with my own company, too.”

What are you proud of?
Of my Instagram account. No seriously: of soulbottles, of course. And that I’m doing something that I can stand by 100 % and work with people that I find exciting, inspiring and cool.

Who or what truly impressed you recently?
We have a new employee and during the job interview, he told me he took a year off to really learn Kung-Fu. His inner strength and peace really impress me big time.

The most important invention of mankind?
It’s still not finished yet, but it’s this thing that can fix all the destruction on the planet and take us to other planets, I just can’t think of the name right now…

Please complete: In the year 2070…
I’ll be 82, still in great shape, maybe married for the third time and busy tinkering with my electronic old-timer spaceship… THE hobby for pensioners in the 2070s.

Why is the soulbottle called soulbottle?
soulbottles have soul, that’s easy. We wanted to create something that has soul. Soulbottles are designed and produced with soul and dedication. And a soulbottle, contrary to a disposable plastic bottle, stays with you for a lifetime. A real soul mate.

Which famous celebrity would like to go out and have a glass of water with?
Oh, there are so many. But the Dalai Lama and Jack White are pretty high up on that list.

What would you cook for us if we came to visit you at home?
Pears, beans and bacon. That’s pretty much the only thing I learnt from my northern family… There’s a vegetarian option, too.

What are you afraid of?
That our crowdfunding campaign won’t get enough attention during this interview. ;)

When was the last time you tried something new and what was it?
I constantly have the impression of trying something new. Vipassana meditation left the most lasting impression recently. 10 days of silence and 8-10 hours of meditation per day. I never meditated before, so it was totally new for me. I was so impressed how much the senses are sharpened and how much I can make my mind concentrate.

What should no one know about you?
I’m a really big Tegan & Sara Fan. So much so that it’s actually a bit embarrassing.

Which question should we have asked?
Paul, how come you are starting a new crowdfunding campaign again after only three years, what amazing thing are you planning this time?