Only 4% of the 500 most profitable companies worldwide are led by women. Only 3% of technology start-ups are founded by women. And women receive less than 10% of all venture capital investments. How do we know that? From watching the insightful documentation „She started it“. For two years, the French journalist Nora Poggi and her team accompanied successful, young women in the start-up universe. Now, the feature length documentation is touring the world and presents five female founders under 30 that have the right stuff to be inspiring idols: 28 year-old Vietnamese Thuy Truong, for example, who develops mobile apps in the name of her own company in silicone valley. Or Brienne Ghafourifar, who collected over a million dollars in investments when she was 18 and founded her own tech start-up with it. The are so many stories out there about women who develop products, set up teams, gather capital, who fail and get back up again, who establish, negotiate and pitch. This exciting documentation is dedicated to them. It does open the old wound of discrimination but also shows what is possible. Be it as a man or as a woman. Or especially as a woman. We’re giving away two pairs of free tickets to the festival to the particularly busy amongst you. Send us an email headlining „PUSSY GALORE“ to hurra@muxmaeuschenwild.de.
___
Filmpremiere ‚She Started It‘ | December 20th, 2016, 6-9pm | Factory Berlin, Rheinsberger Straße 76-77, 10115 Berlin | Free entry | Registration | Facebook | Trailer 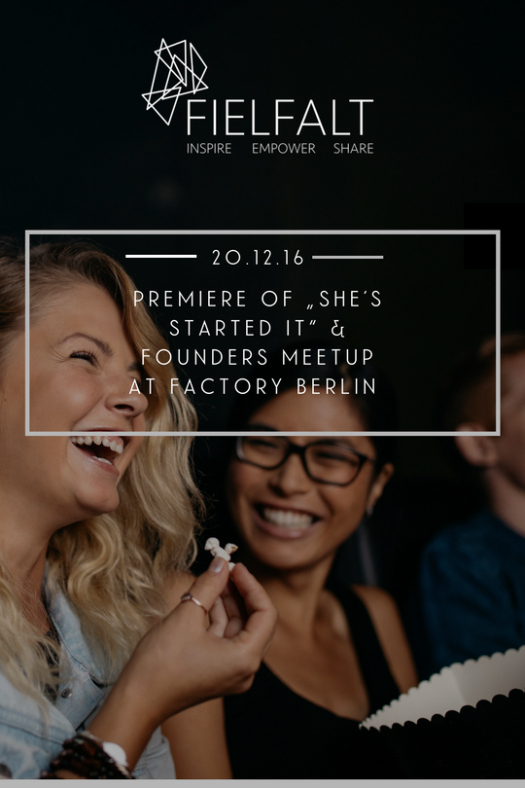