Eating in the Future 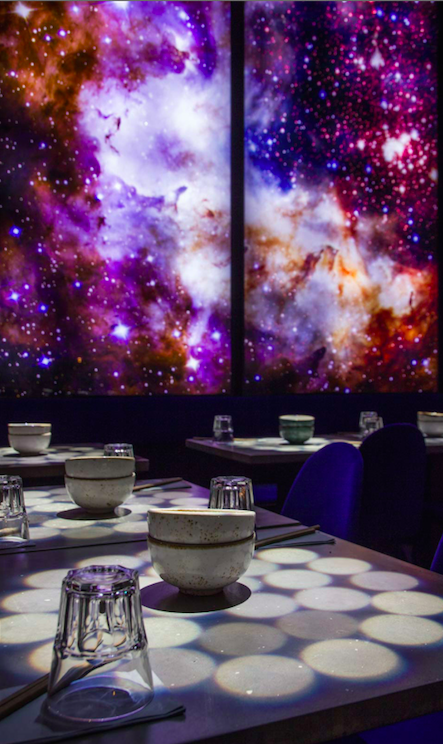 The Roy&Pris at the Weinbergspark in Berlin-Mitte opened about three years too early. We’ll tell you why later. First of all, we’ll quickly tell you that the new restaurant highlight by the gastronomy-greats Axel Burbacher-Burzin and Guanfeng ‚Afon‘ Guan is home to the probably best Dim Sum (loosely translated: small meals and snacks that touch the heart) this side of the Chinese wall. Octopus salad with rhubarb and radishes, for example, or the vegan lily salad. The latter is so fresh, crisp, delicious and seasoned with a citric note that, on your next birthday, you might be tempted to chomp into the fragrant bouquet. Also to be found on the menu: pork chops, lamb or duck, vegetarian dishes, salmon sashimi or the fantastic Man Tous, small yeast dough pockets that you can fill yourself – for example with ever so tender pork belly, pulled duck or aubergines. A fully grown city slicker can manage about 2 to 3 of these little delicacies priced at 7 to 12 Euro. Now let’s talk about ambience and the mix up with dates mentioned earlier. Roy & Pris are two main characters from Ridley Scott’s larger-than-life debut BLADE RUNNER from 1982. The film is set in future Los Angeles and paints a cheerless, neon-drenched picture. Humanity is on the verge of a gaping abyss, all animals are virtually extinct, it never stops raining and artificial creatures like Roy and Pris follow their assignment of developing new living environments, at least until they are hunted down by the Blade Runner aka Harrison Ford and are “sent into retirement”. Adverts and neon lights flickering everywhere. The set design and décor of the film are to this day unrivalled and genre-defining. Countless designers, graphic designers, fashion designers, photographers and the like got their bearings from this visionary look. The film has, in a way, ensured that part of its fictitious future becomes reality. As happened this year in January, when the Roy&Pris opened its doors. Together with the sublime design studio ett la benn and the artist Darius Ghanai, who was the responsible credit and corporate designer for cinema films such as Good Bye Lenin, Das Parfum or Don’t Come Knocking, the founders created a piece of Blade Runner reality. With a combination of twilight, darkness, huge star constellations and neon-glowing threads stretched across the room, an excitement is created that, at the same time, has a relaxing effect, even though it’s not what we’re used to. Not. From. This. World. Or, actually, not from this time. Because Blade Runner is set in 2019. And now we’ve come full circle. Enjoy eating and indulging in the now of the day after tomorrow.
_____
Roy&Pris Starkitchen | Weinbergsweg 8a, 10119 Berlin Mitte | open daily 12 am-12 pm | royandpris.com | Photo: Roy&Pris